Getting back to being "Me" 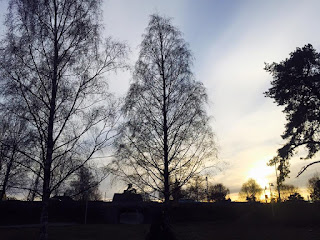 A normal winter afternoon at 2 pm. Yes, Swedish winters can be dark and dreary. Taken with an iPhone 6

Maybe the me is good. Maybe he is just an intolerable, talkative paranoid wretch. I am not aware of all the perceptions, but I like the journey back.

Recently when I was still caught up in the obsessive corporate whirlpool, I had a critical senior exec meeting coming up. The meeting would decide whether the deal I had worked on for the last 6 months would get a green flag to go to the next phase, or be shelved. My boss loves to say this "In sales there are no runners-up. You either come first, or you come last, there is no in between" It sums up things pretty accurately. You either win the deal or you don't. And when you don't it does not matter how many months you worked on it, or how well you managed the deal. So essentially, this was a critical meeting that would decide the fate of all the sleepless nights I had put in. And I was a bit edgy. Had gone through my slides multiple times, and incorporated those last minute changes.

So with a few minutes to spare before I took a cab to the client office, I decided to grab some lunch. As I must have stated before on this blog, I suffer from infrequent migraine attacks, and going empty stomach to a meeting does not help. So I strolled down to the food court a block away to grab a quick lunch. I ordered a Pad Thai at the counter and stood there waiting for it to be served. I was lost. There were a million thoughts going through my mind, passing by at the speed of light. I was pensive. To the point of  philosophically pondering on what life would mean if the deal was shelved. I saw the plate kept on the counter, and I paid and walked off, and remembered that I usually like some Sambal to spice things up. So I turned around and looked for the Sambal and that is when I heard her.

"Haven't I seen you somewhere before?"

I swear, her face had not even registered in my brain till that point. And then I looked. The daze broke. I was back on earth. And I drew a blank. There was no recollection, absolutely nothing. I smiled like an idiot trying to think what would be a polite comeback.

She tried to help "I used to work earlier at the Kista food court, and you had asked me where I was from, and you did not know where exactly Georgia was, you are the one with weak geography, you said you wanted to go to Moldova, you don't remember?". Yes that seemed like me, asking people where they are from. And discussing geography. And discussing how close I have been to that place or where I would want to go. But I had no recollection.

And then it hit me. I pictured myself, cheerful and talkative, striking up conversations with strangers in a country where people did not talk to their spouse unless absolutely necessary. That was me, then. And this was me, now. The guy in the grey suit with a grey look in his eyes. Mechanically doling out the required "Ursäkta" (excuse me) and "Tack" (Thank You) to be polite, but with the most impolite detachment that one can have. And the difference just hit me. I stood there, the plate in my hands, a bit baffled. The girl must have thought I was cranked up.

I did eventually manage to have my lunch. I also said a polite "hejdå" (good bye) to the girl and walked out. I was able to grab a cab and made it to the meeting just in time. But the thought stayed in my head. And it was the beginning of the change. The beginning of getting back to being who I was. The intolerable, talkative paranoid wretch.Thank you girl-from-Georgia.
Pondered upon by Merlin at 1:26 AM

Merlin
Stockholm, Sweden
Im the half-truth in the lie... Im the 'why-not' in the why... Im the last roll of the die... Im the old school in the tie... Im the spirit in the sky... Im the catcher in the rye... Im the twinkle in her eye... Im the gin in the gin-soaked boy :) A consulting manager, an avid traveler, I live to meet new people, go to new countries, discover new cultures. I believe in not being stereotyped, I am a sportsman, I am a geek, I am a manager, I am the managed, I am successful, and yet I have so much to achieve, I travel, I search, I discover... and I squander. Stockholm is beautiful, and somewhere, somehow, I fell in love with the city. And yet, India is more beautiful and the eternal love will never die. I am a foodie, I could live for food, if it did not involve also dying for it in the end. I had a thirst for soaring high, I realized that it will never be quenched, and I am at peace with it. And so I shall wander, maybe forever, don't judge me, for not all those who wander are lost :)

Blogs to Ponder On